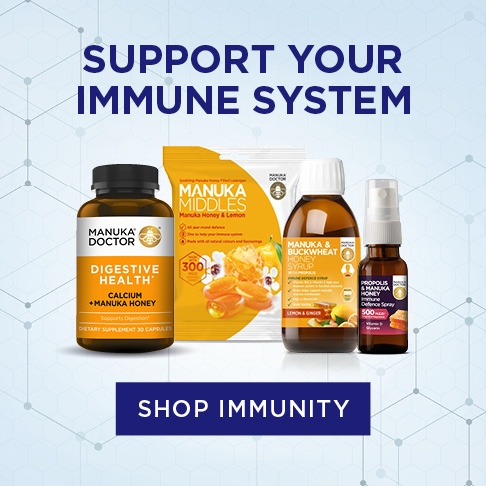 Coughs can be debilitating. Getting in the way of everything from conversations, eating, sleeping and many other daily tasks.

And if you are one of the 300 million people around the world who suffer from Asthma, a simple cough could cause more issues with your breathing.

This May is Asthma Awareness Month, where charities around the world are raising awareness of how to better manage asthma and its symptoms.

Many people know that honey is a traditional remedy for sore throats. But did you know it could also help with coughs too?

In fact, research has revealed that honey should be used above conventional treatments for coughs, blocked noses and sore throats.

These types of infections affect the nose, throat, voice box and the large air passages (called bronchi) that lead from the windpipe to the lungs.

Analysis of the clinical data showed that honey was more effective for improving symptoms, (especially the frequency and severity of coughing) than usual treatments.

In fact, in two of the studies the positive impact of honey meant that people’s symptoms lasted a whole one to two days less among those treated with honey vs alternatives.

The research also says that Doctors could recommend honey as a suitable alternative to antibiotics, which are often prescribed for Upper Respiratory Tract Infections, even though they are not effective. Writing in the journal BMJ Evidence Based Medicine, the authors of the research said:

“When clinicians wish to prescribe for URTI, we would recommend honey as an alternative to antibiotics.”

And if you are buying a jar of honey to keep at hand for coughs and sore throats, why not upgrade to a New Zealand Manuka honey? As the researchers note, not all honey is created equal.

This report states that honey is a complex and diverse substance, so some types of honey may be more effective in treating coughs and colds that others.

What makes Manuka honey from New Zealand different to other honey, is its unique anti-microbial properties that other types of honey do not display.

The naturally occurring compound that gives Manuka these properties is called Methylglyoxal, or MGO for short.

The strength of Manuka honey is often measured in MGO level. The higher the number the more milligrams of MGO is contained in the pot of honey.

Or view our special offers here. More info
Catch up on the latest news