How Manuka Honey may help your gut health 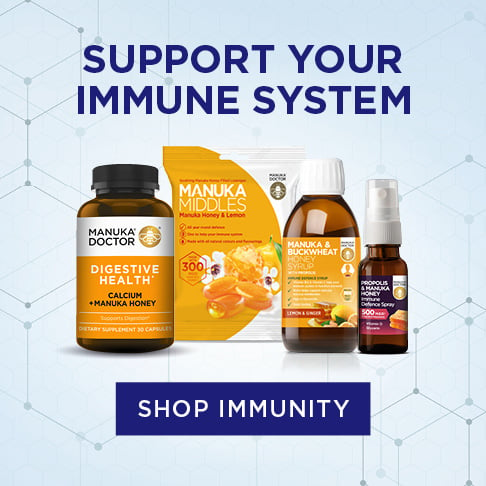 You might reach for the Manuka Honey when you have a cough or cold. But did you know Manuka Honey may help your digestion too? Some Manuka fans swear by its gut-boosting powers. So how exactly can it help?

In recent years, friendly bacteria have been big news. A healthy community of good gut bugs – known as the microbiome – is essential for efficient digestion and for strong immunity, including fighting off bugs, such as those that cause food poisoning. Some research also suggests a diverse, thriving microbiome has a range of other health benefits, including keeping you slim and preventing heart disease.

Unfortunately, modern living’s a bit of a gut microbiome enemy. Your good bugs start building up from birth, and if you were born by Caesarean, you miss out on the dose of bacteria you get from a vaginal delivery. Breastfeeding delivers another whack of friendly bacteria – so if you were bottle-fed, you’ve missed out again. Later on, antibiotics, stress and poor diet can further diminish your community of healthy bacteria.

Hence the current interest in probiotics and prebiotics. Probiotics are friendly bacteria, such as acidophilus, bifidobacterium and lactobacillus, which are the same as, or similar to, those found naturally in your gut.1 Prebiotics are foods that help probiotics flourish – effectively, they act like manure for good bacteria. Effective prebiotic foods include leeks and bananas – but honey has also been shown to have prebiotic activity.2

Studies have revealed that honey contains types of prebiotic called fructo-oligosaccharides, which stimulate and maintain the growth of probiotics including lactobacillus and bifidobacterium.3

And Manuka Honey may be particularly potent when it comes to gut health. Here’s how...

It may help fight stomach ulcers

Some research has found Manuka Honey’s natural antibacterial action may have a role in fighting H.pylori, the bacteria that causes stomach ulcers. But Manuka Honey is also now known to be an effective prebiotic, boosting levels of a strain of lactobacillus, which also protects against stomach ulcers. So scientists believe it may have a double-pronged action.4 At the moment, it’s not clear how much Manuka Honey you’d have to take to tackle a stomach ulcer, though, and more research is needed.

It can help with food poisoning

Manuka Honey is known for its antibacterial effects - and it may work well against one of the main bugs that causes serious food poisoning. Clostridium difficile – usually shortened to c. difficle – causes diarrhoea and other unpleasant and sometimes severe symptoms. A 2013 study revealed Manuka Honey inhibited the growth of the bacteria and could be an effective potential treatment.5 When it comes to other gut issues, there’s still probably not enough robust science to say for sure how and why Manuka may be helpful. Early research has suggested Manuka Honey may be effective in reducing inflammation in inflammatory bowel disease (IBD), and some people with the condition swear by it. But more studies are needed to understand how it may help.

If you want to try Manuka Honey for gut health, why not try mixing it with other gut-friendly foods? Here are some ideas: